In this episode, I talk with composer Marti Epstein about her ONE track – Troubled Queen.

LISTEN TO MARTI ON SOUNDCLOUD! 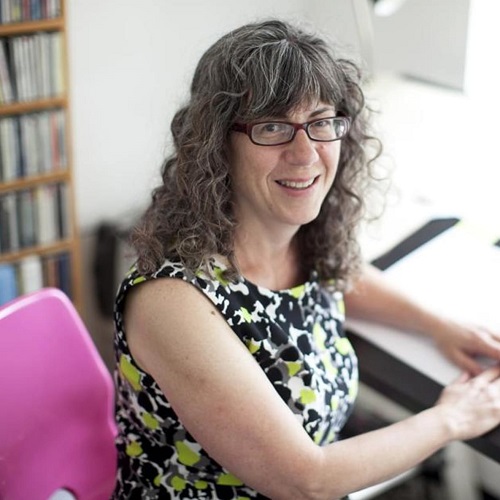 Marti Epstein (November 25, 1959) started studying composition in 1977 with Professor Robert Beadell at the University of Nebraska.  She has degrees from the University of Colorado and Boston University, and her principal teachers were Cecil Effinger, Charles Eakin, Joyce Mekeel, Bunita Marcus, and Bernard Rands.

Marti was a fellow in composition at the Tanglewood Music Center in 1986 and 1988 and worked with Oliver Knussen and Hans Werner Henze.  As a result of her association with Henze, she was invited by the City of Munich to compose her puppet opera, Hero und Leander, for the 1992 Munich Biennale for New Music Theater.  She was on the jury for the 1994 Biennale.

The Atlantic Brass Quintet, Sequitur New Music, The Seattle Trumpet Consort, pianist Kathleen Supové, guitarist Ulf Golnast, Robert Sheena with the Boston Conservatory Wind Ensemble, and the University of Iowa Brass Quintet have recorded Marti’s music.  In 2015, the Ludovico Ensemble recorded and released Hypnagogia, a CD of Marti’s music. She was a resident at the MacDowell Colony in 1998 and in 1999.  She was a recipient of a 1998 Fromm Foundation Commission, and she won the 1998 Lee Ettleson Composition Prize.  She is a recipient of a 2005 grant from the Massachusetts Cultural Council. Marti is a 2020 Guggenheim Fellow and will be composing works for Hinge Ensemble, loadbang, and soundicon for her Fellowship project.

Marti is an active pianist and a devoted teacher.  She plays prepared piano with guitarist David Tronzo in the Epstein/Tronzo Duo.  She is Professor of Composition at Berklee College of Music, where she has taught harmony, counterpoint, and composition since 1991, and is also on the faculty of Boston Conservatory. Marti is a 2020 Guggenheim Fellow in Music Composition.