In this episode, I talk with composer Jacob Ter Veldhuis about his ONE track – Paradiso. We listen to a recording by the NNO orchestra and choir, with vocal soloists Claron McFadden and Thomas Allen, conducted by Alexander Liebreich.

LISTEN TO JACOB ON SOUNDCLOUD! 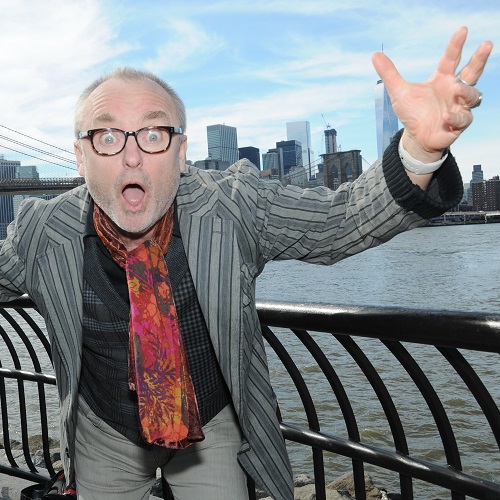 Dutch ‘avant pop’ composer JacobTV (Jacob Ter Veldhuis, 1951) started as a rock musician and studied composition and electronic music at the Groningen Conservatoire. He was awarded the Composition Prize of the Netherlands in 1980 and became a full time composer who soon made a name for himself with melodious compositions, straight from the heart and with great effect. ‘I pepper my music with sugar,’ he says.

The press called him the ‘Andy Warhol of new music’ and his ‘coming-out’ as a composer of ultra-tonal, mellifluous music reached its climax with the video oratorio Paradiso, based on Dante’s Divina Commedia.

JacobTV’s so called boombox repertoire, works for live instruments with a grooving sound track based on speech melody, became internationally popular. With about a 1000 performances worldwide per year, he is one of the most performed European composers. JacobTV is still an outlaw in the established modern classical music scene, and was accused of ‘musical terrorism’. According to the Wall Street Journal some of his his work ‘makes many a hip-hop artist look sedate’. In 2007 a 3 day JacobTV festival took place at the Whitney Museum of American Art in New York City. His never ending reality opera THE NEWS is constantly updated and various editions were performed in Chicago, Rome, Amsterdam, Hamburg, New York.